Posted on March 6, 2014 by potbelly@lablanchepoterie.com

Here’s a favorite piece from my past. I made this one while apprenticing at The Blue Door Clay Studio in 2000. I was completely influenced to copy the image from the book I’d been reading – a book called Petroglyphs, Ancient Language / Sacred Art, by Sabra Moore.

Moore is an artist who decided to copy the petroglyphs and pictographs from the cave walls and rocks and make a book out it. These ancient works of art exist all over North America. She made this book as a way to preserve the art seeing as time, erosion and vandalism are threatening these ancient works.

Moore says: “The creation of this monumental art were from the 500 Indian Nations inhabiting this continent for the past 30,000 years. Their descendants are here today.”

As I myself was researching the book to make this post I noticed that all of the cave drawings that I copied onto pottery were from the back of the book in a section called Northwest Coast/Arctic and Subarctic. I was very much attracted to the kind of art that has likely subliminally influenced me living here in Canada.

Leafing through the book I see images that I copied, or thought about copying, and I count six images in total, so there are possibly four or five pieces in this style somewhere out there. I sold them to pottery lovers in Winnipeg. This one, pictured below, I decided to keep. I don’t know if I can ever make one like this again. It requires a dry shino glaze in a gas kiln and I have been firing electric since coming east in 2002.

I recall making a large oval platter that was sold in a gallery in Osborne Village, and a few other pieces though I can’t recall what they were. Platters? Tall vessels? Perhaps. I only remember drawing on the leather hard clay with a dull pencil. And I recall not being able to fit all of the figures from the drawings in the book onto the pieces I was making in the studio. Drawing is not my strong suit. 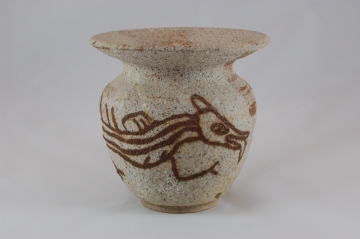 That was the case with this piece. Only one serpent fit on the vessel. It’s from page 145 of the book, and the illustration shows two serpents.

“The Kwakiutl Sisiutl is a double faced serpent with a snout like the sea snakes at Nanaimo Petroglyph Park. Sisutl can transform himself from sky into lightning, from fish into canoe. Like Quetzalcoatl, he can be both bird and reptile. A sailor on the Columbia witnessed a monstrous reptile emerging from the water near Clayoquot in 1791. ‘The Indians knew all about it and described it as a long creature with a huge mouth and teeth; in every other respect like a serpent. They called it Haietlik and said it was very scarce.'”

And so like the serpent in Clayoquot, these cave drawing pieces of mine are just as scarce.

This entry was posted in my work. Bookmark the permalink.